This is an interview that I’ve been looking forward to doing. For those that follow Tate on Twitter or ”friends” on Facebook one thing he is known for is his outspoken nature, opinions and views. 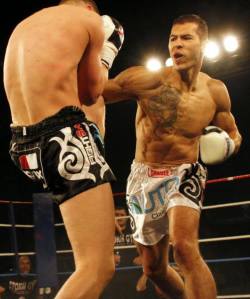 For those who are fights fans, They know him for his talent, skill and his ability to finish a fight in an instance.

Coming off the back of a world title win and building up to the ‘Super Fight Series’ in May 2015 at Wembley, Let’s have a quick catch up with the man who can’t be silenced.

L2F: Andrew ‘King Cobra’ Tate, Known for your explosive style and KO power in the ring. Out of it, you’re sharp tongued, outspoken and opinionated especially on social networks. Be truthful, Is It all an act?

AT: Lions don’t act like lions. Lions ARE lions.

L2F: You have a big 2015 planned, Most notably the ‘Super Fight Series’ at Wembley Arena in May. Who out of the tournament entrants do you want to face the most?

AT: I don’t care. My victory is secured already. I have consulted the gods and they have chosen me. The tactics of the other contestants are obvious, they do the same thing every time. I’m an unpredictable left handed fighter who fights from both stances and using a karate style. They cant spar people like me, I’m unorthodox.

Plus, I’m the best looking by far and this isn’t a joke this is totally serious.

L2F: The fight with Steve Wakeling has been spoken about for a long time? Any chance of that happening?

AT: Doubt it, offered it to him a ton of times. Don’t really know the guy or his reasons for not fighting but I was up for it.

L2F: Other guys too that fall in your category are Simon Marcus, Artem Levin, Joe Schilling. Have you got your eyes on any of these guys to fight?

AT: I accepted a fight with Levin in Italy but ‘Glory’ pulled him back and wouldn’t let him.

Schilling and I have argued on twitter a bunch of times. I’m sure I would beat them all. I just fight who I’m told to fight, get in there  and do what I’m meant to do. It’s as simple as that to me.

A Tidal wave doesn’t think as it runs down the mountain side about which rocks to crush. It just destroys whatever is in the way.

L2F: The ‘Ax Forum’ gave some interesting reading on a thread about you, What’s the deal with you and Marlon Hunt?

AT: Marlon who? Never heard of him. He must be a nobody. I think I beat the shit out of someone called Marlon a while ago. A paper champion or something. It was an easy task. Maybe it was him?

L2F: I was in the crowd and saw you stop a modern day legend in Wendell Roche to add another title to your collection, Who has been the biggest driving force in your success?

AT: Wendell’s the man. A fearless warrior. Myself and Ghita are the only two men to have ever stopped him I believe? Success requires lots of driving forces, one alone isnt enough.

I have 1000 reasons for fighting which I will not name – but Master PO of Wudan Mountain and Amir Subasic of Storm gym would be the largest external influences.

L2F: Any advice to up and coming fighters out there?

AT: Dump your girlfriend. She’s been shagged by a bunch of men before you anyway so stop pretending she’s special. If someone with more money than you showed a genuine interest in her she’d leave. These hoes aren’t loyal.

Why would you be with a woman whos not a virgin anyway?

If you knew the things I do to girls and how their boyfriends “love” them afterwards, you’d laugh.

She is USED goods. SECOND HAND. She will only complain and moan at you for training hard and if she isnt moaning then your not training enough to ever be good.

Become a champ and just bang everyone elses girlfriends. Thats what I’ve been doing for years.

AT: No I don’t train anymore. I don’t need too. I trained really hard for 8 or 9 years and became fucking AMAZING. As you can tell from watching my videos. Now I don’t need to train, I drink a lot of vodka and have sex as much as humanly possible.

No bravado, maybe 10 times a day, every single day with 3 or 4 different women. Makes me feel powerful.

Then a couple days of bagwork before the fight – maybe 3 or 4. Then that’s it. Fight time.

L2F: If you wasn’t fighting, What would you be doing?

AT: I’d be doing what I still do now. Most fighters are so one dimensional that fighting is all they have. Fighting is who they are.

To me, Fighting’s nothing. I don’t look hard, I walk around in nice suits and drive sports cars, drink martinis and fuck models.

I’m a man who is naturally gifted and kicks the shit out of people who try 1000 times harder than I do. I don’t try at all. It’s pathetic really, how weak everyone is compared to my greatness.

L2F: You’re money driven, What made you get into fight sports considering the lack of money at the beginning?

AT: Because I pick it up and put it down like it’s nothing. I dont have to try hard like everyone else. Why not be a world champion if you could do it with the same effort as ordering a mcdonalds?

GOD HAS BLESSED ME. PLEASE UNDERSTAND. GOD HAS MADE ME BETTER THAN EVERYBODY ELSE.

I’ve made a lot of money from fighting but I’ve still made more outside of it, I spend 90% of my time pursuing business interests. Fights for me are so easy, I may aswell just not do them. It don’t take any of my life up really because I don’t need to train like every other loser does.

L2F: Before we go, Any last words for those reading?

AT: I could take your girlfriend or wife from you make no mistake. Remember that when you speak to me. Show respect. Or i’ll do it.

I’m a pimp super star. I’ve had more women than you’ve had meals.

2 responses to “Andrew ‘King Cobra’ Tate: ”Dump your girlfriend. She’s been shagged by a bunch of men before you anyway.””

HAVE YOUR SAY Cancel reply